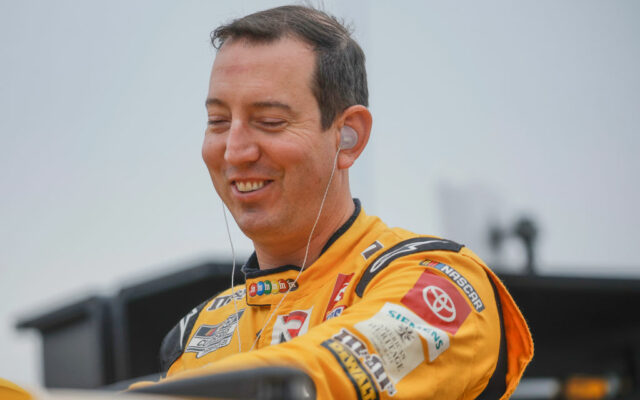 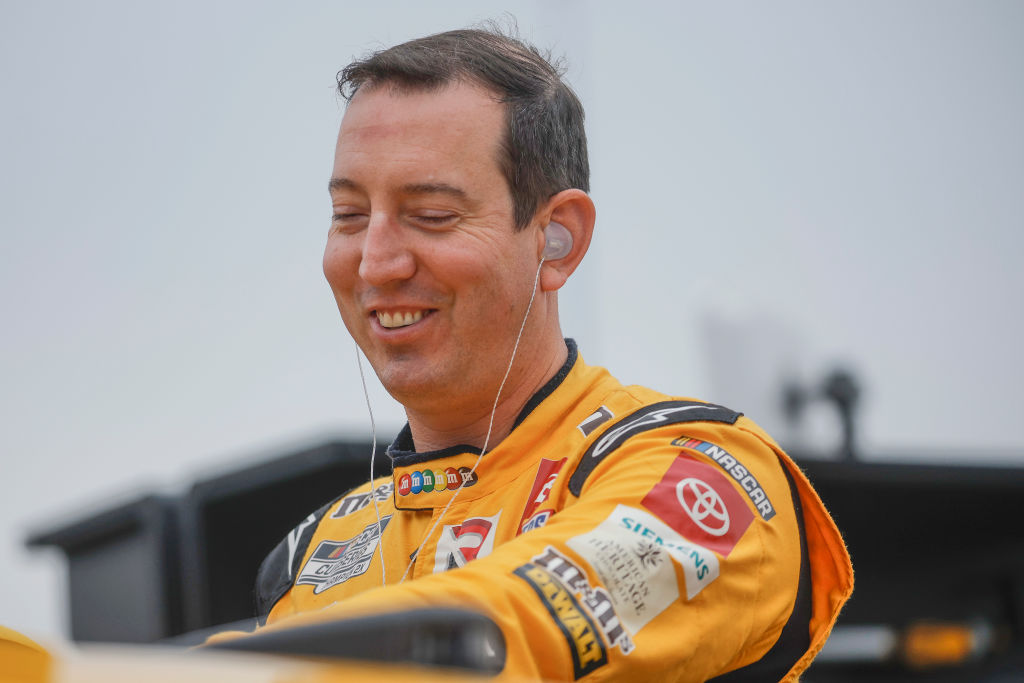 The biggest domino the NASCAR’s current silly season has fallen.

Kyle Busch announced Tuesday that he was “taking his talents to Welcome, North Carolina” to join Richard Childress Racing.

News of Richard Childress Racing being the final destination leaked last week, making Tuesday’s announcement not a huge surprise.  However, in the grand scheme of the Kyle Busch discussions, the former champion ending up in a Richard Childress Chevrolet is a shocker.

Busch has driven for Joe Gibbs Racing since the 2008 NASCAR Cup Series season after three full seasons with Hendrick Motorsports.  Busch is a two-time NASCAR Cup Series champion with 60 NASCAR Cup Series race wins and more than 200 wins across NASCAR’s three top national series.  It was widely believed Busch would return to Gibbs despite the team saying it was working hard to find a new major sponsor to replace Mars, which decided to redirect marketing resources elsewhere.

Even late into the process, it was widely expected that Busch would stay with Toyota and Gibbs.  However, over the past few weeks, that tone had changed and seemed apparent Busch would go elsewhere.  The main question was who could afford Busch and his salary expectations.

The owners with histories of having the deepest pockets are Rick Hendrick of Hendrick Motorsports, Gene Haas of Stewart-Haas, and Matt Kaulig of Kaulig Racing.

Stewart-Haas was seen as an early non-Gibbs favorite because of Haas’ willingness in the past to plug a driver into a car that he directly sponsors himself.  He most notably did that when he plugged Busch’s older brother, Kurt, into the 41 car with Haas Automation as the sponsor in 2014.  However, that dimmed when Aric Amirola decided to not retire after the 2022 season as he had announced earlier to return to the 10 car with Smithfield returning as a sponsor.  It is widely believed Cole Custer would return the 41, though his seat would likely have been the one given to Kyle Busch if the team brought him onboard.

Kaulig technically has a seat available with its 16 car, though it is likely it will continue to be a “trophy hunting” car with a rotation of drivers.  Matt Kaulig has invested a lot of personal money and his LeafFilter brand into his team, building upon the steady success his NASCAR Xfinity Series operation has developed and broadened to the NASCAR Cup Series full-time in 2022.

Hendrick was not likely as it has all of its seats filled for at least the next season and it would have been a challenging move for the team to have a reunion with its then-prospect.  Alex Bowman likely would have been the open seat if Hendrick tried to bring Busch onboard — though, Bowman has the support of Ally, which became a sponsor of the 48 car when Jimmie Johnson was behind the wheel.

A fourth possibility included 23XI Racing, the other full-time Toyota team in the NASCAR Cup Series.  Toyota Racing Development had said it was a top priority to keep Kyle Busch in the Toyota family — both because of Busch’s personal success on the track and because of Kyle Busch Motorsports being a great development platform for Toyota drivers in the NASCAR Camping World Truck Series.  23XI Racing made a big splash this season with a surprise announcement of signing current Richard Childress Racing driver Tyler Reddick to join the team for the 2024 season.  Which car he would drive was not announced, it would be a “we’ll figure it out later” decision.  Currently, Bubba Wallace is the driver of the 23 car — though he is driving the 45 car the rest of this season in a bid to the owner’s championship since that car is eligible — and Kurt Busch is slotted to drive the 45 car, but has been sidelined by a concussion.

What’s next for Childress

Kyle Busch had acknowledged that his decision would lead to other teams being able to make decisions about what vacancies they need to fill and what seats are available for drivers.

Richard Childress Racing announced Tuesday Busch would be driving the 8 car next season — the car Reddick currently drives.  Busch will also get Reddick’s crew chief and likely the rest of the 8 team.  However, Childress also said the Reddick is still under contract with Richard Childress Racing and will drive a third chartered team.  No number or other details of that third team were disclosed.  Richard Childress Racing only has two charters, so it will either be purchasing a charter if it plans to continue into the future as a three-car team or will need a one-year lease for a charter.

Almost every full-time car is chartered.  So where could Childress get an extra charter?

None of the major teams or teams with announced 2023 plans are likely the sell or lease out their charters, so that will exclude Penske, Stewart-Haas, Hendrick, Joe Gibbs, Trackhouse, Petty GMS, 23XI Racing, Roush Fenway Keselowski, and JTG Daugherty.

The potential charter possibilities come from a few teams.

Spire Motorsports owns two charters, the 7 and 77.  It is not completely clear what Spire’s long-term plans are as an operation, since it was very busy last year in the charter transaction business.  The 7 car is driven by Corey LaJoie.  It is not clear what the plans are for that car next year, though that car has been the “main” car of the operation.  As for the 77, that has been driven by a mix of drivers, primarily Josh Bilicki.  It is not clear what the team plans to do for next season, though it would not be a major surprise if Spire leased out — or even sold– the 77 charter to Childress for a revenue injection.  With a hefty rumored price tag for charters, it would be an attractive option to sell, but would Childress buy the charter or lease it?

Rick Ware Racing has typically been involved in several charter deals in recent years, whether that has been co-owning or leasing out charters.  The team currently has two charters — the 15 and 51.  The team has not announced any plans for 2023, but the team has run Cody Ware in the 51 and a rotation of drivers in the 15.  The team currently has an alliance with Stewart-Haas Racing.  Team owner Rick Ware has said in the past that owning these charters is part of his team’s long-term plans, which makes selling either of them unlikely.  But, that doesn’t kill the possibility of one being leased out next season.

Kaulig Racing has two charters, the 16 and 31.  It is not expected to sell either charter, though it is possible the team could lease its 16 charter.  Like Trackhouse, though not to the same extent, last year, Kaulig was aggressive in purchasing two charters with long term plans.  It is expected Justin Haley will continue to drive the 31 car and the 16 car continues to hunt for trophies, though it is possible Kaulig puts a full-time driver in the 16 car for 2023.

Front Row Motorsports has two charters, the 34 and 38.  The team typically operates on a year-to-year basis and is expected to maintain their two charters.  There was chatter last year about the team planning to sell a charter to 23XI Racing, but Front Row backed out deciding to stay involved in the Cup Series.

Wood Brothers has not officially announced their 2023 driver plans, and with the team’s history and alliance with Penske, it is an unlikely subject to sell or lease their charter.

Live Fast Racing is often an owner-driven team with BJ McLeod behind the wheel.  It is unlikely it would sell or lease its only charter on its 78 car.

What’s next for Busch

Obviously, the big next thing for Kyle Busch will be driving the number 8 Chevrolet for Richard Childress Racing in 2023.

However, one of the big negotiation snags was Kyle Busch Motorsports.

Busch was expecting a big salary because part of that big salary goes into Kyle Busch Motorsports and other business ventures.  In turn, Kyle Busch Motorsports was a major development team for Toyota.  Now that Kyle Busch is back in the Chevrolet camp, it is expected the truck team will also move to Chevrolet.  That will raise some questions about the drivers of that team — whether they are staying with the team or if Toyota pulls them out because of how contracts are written.

The addition of Kyle Busch Motorsports to Chevrolet will help the manufacturer with driver development.  An issue Toyota often faced in recent years is it had so many prospects in the system because of Kyle Busch Motorsports that it did not have a place for them when they got to the NASCAR Cup Series.  It will be interesting to see how things develop for the truck series team leading up to the 2023 season — both in terms of who will be behind the wheel and which sponsors will be staying with the team.

What’s next for Gibbs and Toyota

It appears Joe Gibbs Racing will put the owner’s grandson, Ty Gibbs, in the 18 car that Kyle Busch is vacating.

Gibbs made a grand entrance last season winning his first ever NASCAR Xfinity Series race at the Daytona Road Course in impressive fashion.  He ran a part-time schedule in 2021 and is embarking on his first full-time season in the Xfinity Series this year, where he is a championship contender.

Gibbs also made his NASCAR Cup Series debut this year, filling in for Kurt Busch in 23XI Racing’s 45 car.  He is expected to finish the season in Kurt Busch’s seat — now running the 23 car.

Toyota had said keeping Kyle Busch in the family was a top priority — both for his success and for his truck series team.  That clearly failed.