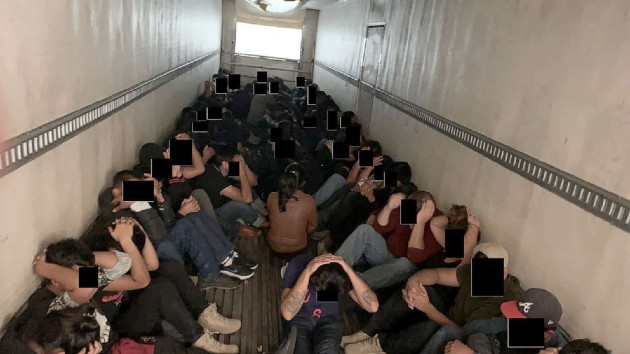 (NEW YORK) — Eight people were arrested Tuesday in connection with what federal authorities believe is a sprawling human smuggling operation that may have victimized thousands of migrants.

Erminia Serrano Piedra, also known as “Boss Lady,” allegedly ran the operation along with seven others, federal prosecutors told reporters. The eight were arrested in Alabama, Louisiana, Mississippi and Texas on charges related to transporting a non-citizen for monetary benefit while endangering human life.

The Department of Justice is also seeking $2.3 million in property assets allegedly connected with the operation.

“This organization was motivated by personal greed and Piedra and her co-conspirators prioritized that greed over the safety of those that they illegally smuggled,” Assistant Attorney General Kenneth A. Polite told reporters Tuesday.

Court documents did not list attorneys who could speak on the suspects’ behalf. They have not yet appeared in court.

Department of Justice officials say the migrant victims, believed to be citizens of Colombia, Guatemala and Mexico, were brought to so-called “stash houses” where smugglers conduct and conceal their illicit activity. Authorities say that some of the victims were forced into suitcases while others were crammed into the back of tractor trailers, pick-up trucks and even water tankers as part of their journeys into and across the U.S.

Those who drove the vehicles used to transport migrants were possibly paid as much as $2,500 per person, according to the Department of Justice.

“We have alleged that this particular organization was responsible for the smuggling of at least hundreds if not thousands of potential migrants,” Polite said.

Agents from Homeland Security Investigations, the division of Immigration and Customs Enforcement that handles smuggling enforcement, led the probe which resulted in the arrest of Katie Ann Garcia, one of the eight suspects, on Tuesday in Laredo, Texas, where authorities say 12 migrants were found, including two minors.

“If you commit the crime of human smuggling and if you manipulate and imperil and take advantage of struggling and fearful migrants — we are coming for you,” Deputy Secretary of Homeland Security John K. Tien said Tuesday. “We will investigate you. We will prosecute you to the fullest extent of our laws. We will leave no stone unturned until we end your nefarious practices.”

The Department of Homeland Security says it has ramped up its crackdown on transnational organizations that facilitate human smuggling — in recent months arresting nearly 5,000 people whom the department suspects of being associated with criminal trafficking.

The Biden administration also launched a “Joint Task Force Alpha” with DHS and DOJ as part of the government’s work to, as Attorney General Merrick B. Garland said Tuesday, “dismantle the most dangerous human smuggling and trafficking networks.”

“The charges announced today are just the latest example of these efforts’ success,” Garland said in a statement. “The Justice Department will continue to bring our full resources to bear to combat the human smuggling and trafficking groups that endanger our communities, abuse and exploit migrants, and threaten our national security.”