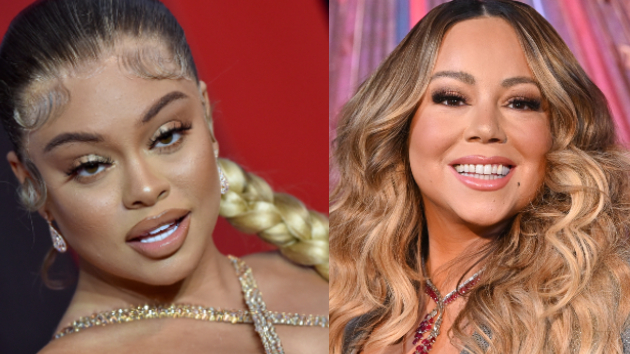 (NOTE LANGUAGE) It’s the collaboration no one saw coming. Latto and Mariah Carey teamed up for the remix of Latto’s hit single “Big Energy,” and she even called on DJ Khaled to add his flare.

The hot new track, which opens with Mariah hitting her legendary high note, dropped Monday– just three days after Latto released her second studio album, 777. And, in the midst of the crazy success the album has already seen, the Atlanta rapper was excited to announce the iconic feature.

“Ima be ya fantasy, you ain’t gone believe this // hol’ up, got Mimi on the remix,” Latto says on the track.

She’s since blown up Twitter, re-tweeting coverage of the news and answering fans’ questions about working with Mariah Carey.

“I originally thought Mariah for the remix back in like November when it first started going up but didn’t think I could get her realistically… fast fwd I said f*** it and reached out. She was down.” Latto said.

Once Mariah was locked in for the feature, Latto says she was “sooooo nervous” to work alongside her. “I was like what do I say y’all lol but the conversation just floweddd she was so genuine and I definitely was overthinking.”

Mariah returned the love in a response tweet to Latto’s Sunday birthday message to the singer, and congratulated the younger star on all of her success.

“So excited for this moment dahhhhllling!!!!! So happy and proud of you and all you’re accomplishing!!!,” Mariah said. “But I don’t have BIRTHDAYS! ‘It’s my anniversary!!!’ Congratulations Beautiful.”

The best part of working with the “Fantasy” singer, was “HEARING HER HIT THAT HIGH NOTE IN PERSON!!!!,” Latto said.

“Big Energy Remix” is out now.