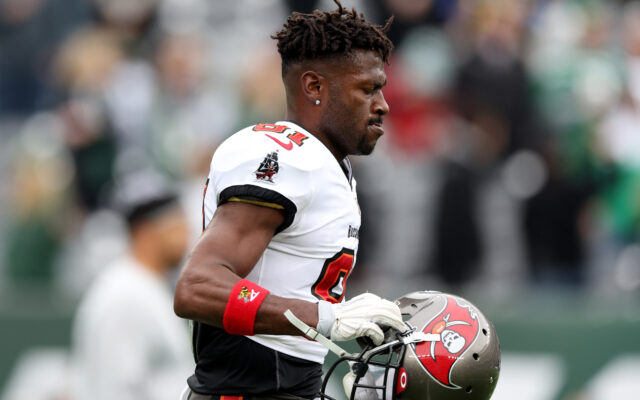 EAST RUTHERFORD, NEW JERSEY - JANUARY 02: Antonio Brown #81 of the Tampa Bay Buccaneers looks on against the New York Jets during the game at MetLife Stadium on January 02, 2022 in East Rutherford, New Jersey. (Photo by Elsa/Getty Images)

It has been a busy 12+ hours for Antonio Brown.

After leaving the Tampa/Jets game it appears Antonio Brown got busy in a studio and dropped a rap song.

Video of Antonio Brown leaving the field after taking off his jersey and shirt and throw it into the stands. pic.twitter.com/1hwNYei5Fq

The name of his song is Pit Not The Palace.

It does not address any of the issues that led to his abrupt departure from Sunday’s game but it does address his high-end lifestyle.

Some are wondering if the antics from Sunday afternoon were just all part of ‘promo’ for his song.